Last week I attended the AAAI spring symposium on “Beyond Curve Fitting: Causation, Counterfactuals, and Imagination-based AI”, held at Stanford University. Since Judea Pearl and Dana Mackenzie published “The Book of Why”, the topic of causal inference gains increasing momentum in the machine learning and artificial intelligence community. If we want to build truly intelligent machines, which are able to interact with us in a meaningful way, we have to teach them the concept of causality. Otherwise, our future robots will never be able to understand that forcing the rooster to crow at 3am in the morning won’t make the sun appear.

Causal inference has always been somewhat of a niche topic in AI. All of the cutting-edge machine learning tools—you know, the ones you’ve heard about, like neural nets, random forests, support vector machines, and so on—remain purely correlational, and can therefore not discern whether the rooster’s crow causes the sunrise, or the other way round. This seems to be changing though and more and more big shots start to recognize the limits of prediction methods and acknowledge a need for major retooling in the community.

Yoshua Bengio from the University of Montreal, who’s one of the pioneers in deep learning, was attending the symposium too. He was speaking about transfer learning and causal discovery (the slides are available on the website). One funny anecdote of the event was that nobody during his talk—apart from himself, maybe—knew yet that Yoshua will be awarded the 2018 Turing award (together with Geoffrey Hinton and Yann LeCun) for his contributions to neural networks and AI.

Exciting news to all sailors and passengers in AI and ML: 2019 Turing Prize awarded to 3 ML pioneers. https://t.co/iRMeVIZLSg
Our Why-19 symposium https://t.co/2t0bPKvjXt was fortunate yesterday to host Bengio's brilliant lecture just before hearing of the good news. #Bookofwhy

After his presentation, Yoshua was excusing himself for not attending lunch, because he had to take an “important phone call”. That’s when the news broke. So together with Judea Pearl’s keynote on the first day, that made already two Turing award winners at the symposium.

Based on Pearl’s seminal work on graph-theoretic causal models (directed acyclic graphs), tremendous progress has been made in the field of causal AI during the last 30 years. But causal inference is obviously also super important in other fields that rely on empirical work. And they all have developed their own idiosyncratic methods for approaching causal questions. The symposium program was thus divided into several “Causality + X” sessions, where X was referring to many of the scientific disciplines in which causal inference plays a role:

My session was about causal inference in the social sciences, together with Kosuke Imai from Harvard. I was responsible for representing the economics view. 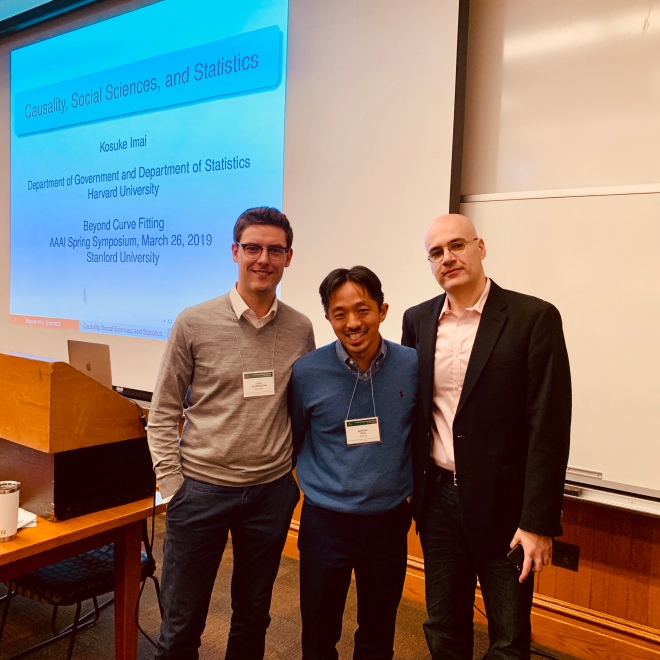 If you’re interested in my slides, you can have a look here. Soon, Elias Bareinboim (who was organizing the event, thanks Elias!) and I, will also release a working paper, in which we’ll get into much more detail on the subject.

To quickly summarize my main message: Having spent considerable time studying the methods for causal inference developed in computer science, I came to the conclusion that economists can learn a lot from engaging with that literature. Of course, that goes the other way round. So I think we could all benefit tremendously from mutual knowledge exchange, which—I must admit—didn’t happen so far to a satisfactory extent. But I see many promising signs of improvement. More and more economists express interest in DAG methodology and what they have to offer.

I commented on a DAG thread recently, and my notifications exploded. 🤯 Just as well. I'm diving into DAGs tomorrow in graduate Metrics. No need to reinvent the wheel, so I'm using @PHuenermund's excellent slides. pic.twitter.com/2ijqkr0uhM

One thing became clear to me when attending the symposium. The field of causal AI is developing rapidly in so many directions, and a lot of different fields are currently adopting graph-based approaches to causality. Econ should keep pace if we don’t want to lose touch with these developments. That doesn’t mean that we need to abandon our own unique perspective on causal inference, which is tailored to our specific needs. But coordinating on one basic framework for causal inference can have huge potential for cross-fertilization between disciplines. Something that we’re not nurturing nearly enough at the moment, if you ask me.